Westgate Mennonite Collegiate is a Christian school grounded in the Anabaptist tradition. It is the mission of the school to provide a well-rounded education that will inspire and empower students to live as people of God. In 2002, the school’s board, staff and larger community decided that this mission statement captured the school’s past and set a direction for the challenges of the future. 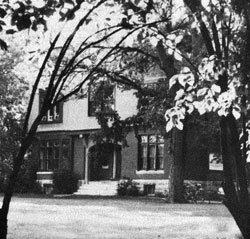 The school, the Mennonite Educational Institute (Mennonitisches Bildungsinstutut) was formed in 1958 to offer students an education that fostered the ideals that the supporting Mennonite community valued. The board of directors recognized that the foundations of the future was rooted in the youth of every generation, and the school needed to provide the study of sound academics, faith issues, value systems, scientific investigation, fine arts, and a critical analysis of current issues that faced students and their community. This task fell upon Ms. Anna Penner who taught Gr. 7 and 8, and the principal, Mr. Frank Neufeld, who instructed Gr. 9 through 11. Classes were first held in the educational wing of First Mennonite Church, where one student mused that they were “either a throwback to the one-room school or a forerunner of an open area school.” The school then moved to a vacant church building on Edison Avenue where classes in the provincial curricula, Anabaptist history and German instruction were only compromised by the limited facilities. Physical education consisted of outdoor volleyball, ping pong and tumbling on what few mats that were available.

The school acquired the building and grounds of the Convent of the Sacred Heart on 86 West Gate in 1964. Once a prominent private residence, an educational wing had been added earlier, so there was room for classrooms and a girls’ dorm. The property’s livery stable became the “Art Barn” and the adjacent yard offered more space for outdoor sports. Now known as Westgate Mennonite Collegiate, the school continued to develop its reputation for inspired drama productions and excellent music making. Yet, indoor physical education relied on the gyms of nearby schools and churches.

A major capital project constructed a much-needed gymnasium, multi-purpose room and office space in 1978. Westgate stunned the provincial high school sports scene in that year when the Senior Boys Volleyball team captured the championship despite having a school population of 98 senior students. Unfortunately, the new gym and addition coincided with soaring interest rates, and the school needed to rely on the benevolence and commitment of long-time supporters to keep the doors open.

In time, this financial crisis subsided. Westgate continued its renown for its choral program, and a band program was added. Students could choose from a diverse extra-curricular menu that included a variety of intra- and inter- school sports, drama and musical productions, Chapel planning, outdoor education trips with the Marsh and Mountain Club, German Exchange opportunities and service and study tours to Europe and the Middle and Far East. The school was now blessed with a steady enrolment and attention turned to enhancing the facilities to accommodate existing and new programs. The old “mansion” was no longer serviceable for classroom use and it had lost most of its architectural character even before it had become Westgate Mennonite Collegiate. It was replaced in 1989 with a structure that offered new classrooms, computer and science labs, student lounges and a new multi-purpose room that allowed its former space to be renovated into a kitchen and cafeteria. 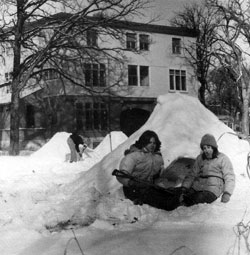 As the school moved through the decades, the funding of its operation changed. The province at one time contributed only 20% of what it costs to educate a student, but now funds about 50%. Tuition continues to provide a large portion of the school’s revenue, and several Mennonite Churches of Canada congregations formerly from the General Conference presently include contributions to the school in their budgets. Other funds came from the Westgate Women’s auxiliary, who operated a Thrift Store until 1999, and who initiated a plethora of cheese, fruit and chocolate sales that the present day Westgate Parent Association continues. Annual events such as a banquet, Cyclathon and Work Day also augment the funding of school operations and projects. Westgate has been blessed by this support, and continues to provide its students with the educational opportunities and school community environment envisioned by its first board members.

When Westgate considered itself at a crossroads regarding its present site, an Exploration Committee was struck to examine solutions to some pressing needs. Enrolment was healthy and there were at times waiting lists in some grade levels. A survey revealed that there was a high degree of parent and church community satisfaction with the school at its present size where an intimate educational experience could be ensured. In response, the school’s stakeholders participated in a Collective Design Process for development of Westgate. Prairie Architects Inc. designed several possibilities for the school community and neighbourhood to consider. Unfortunately, the school was not able to gain civic approval for this redevelopment.

Westgate Mennonite Collegiate’s 2008-2009 academic year was significant in the school’s history, a watershed of sorts. We celebrated fifty years of educating and nurturing faith of two generations of students. Homecoming week with a worship service, a collective expression of music making at a packed Choral Concert, and a Westgate community display of visual arts at the Mennonite Heritage Gallery all served to remind us how blessed we have been over the last half century.

Within the same year, the board recognized that the school will face challenges as it moves into the next fifty years. Development of this campus to meet our needs appeared not possible, and with the help of a survey and consultations with our school community, a strategic plan report was written that identified our core priorities and how they need to be supported in the decades to come. In light of this report, a Facility Search Committee was formed to consider potential sites to develop a new campus for Westgate.

The Facility Search Committee considered over 20 potential sites for relocation, with three sites that best fit the Committee’s search criteria given extensive scrutiny. The cost of renovation and construction of these sites ranged from $14 million to $19 million, and it was clear that the extended Westgate community would be unable to raise this level of funds. With this in mind, it was determined that Westgate’s future would be best secured by a scaled down building proposal that took advantage of portions of the existing facility that could reach back to the emotional and historic ties it has in its current location.

A Westgate Redevelopment Committee was formed to oversee the redevelopment of the school at 86 West Gate. Civic approval of the redevelopment plan that would replace the 1950s middle section of the school with new construction was granted in spring 2012. However, the City needed to be informed by June 10, 2016 that construction would begin. Finding a facility to relocate students and staff for the year of construction became as difficult as getting the Variance. Thankfully, mere days before the deadline, Chapman School in Charleswood was leased for the 2016-2017 year. Staff and students made the former elementary school work, with additional class space secured in two nearby churches, one requiring hourly shuttles across the Assiniboine River. This relocation was embraced with grace and good humour, especially with the knowledge that construction was in full swing. Completed just in time, and under budget at $10.3 million, staff, student and parent volunteers moved furniture and equipment in over Labour Day Weekend. It was wonderful to see students enter the atrium leading to the rest of their new school that first September 2017 day.

The school community is grateful for the support and prayers that have been offered by many, and we continue to ask for these blessings as the school continues to educate young people for the challenges beyond the school’s doors.